Customer matched zone "Locations not covered by your other zones"
View cart “German StuG III Tank Destroyer” has been added to your cart.

The M4 Sherman, officially Medium Tank, M4, was the most widely used medium tank by the United States and Western Allies in World War II. The M4 Sherman proved to be reliable, relatively cheap to produce, and available in great numbers. It was also the basis of several successful tank destroyers, such as the M10, 17pdr SP Achilles and M36B1 . Tens of thousands were distributed through the Lend-Lease program to the British Commonwealth and Soviet Union. The tank was named by the British for the American Civil War general William Tecumseh Sherman.

The relative ease of production allowed large numbers of the M4 to be manufactured, and significant investment in tank recovery and repair units allowed disabled vehicles to be repaired and returned to service quickly. These factors combined to give the Allies numerical superiority in most battles, and many infantry divisions were provided with M4s and tank destroyers.

After World War II, the Sherman, particularly the many improved and upgraded versions, continued to see combat service in many conflicts around the world, including the UN forces in the Korean War, with Israel in the Arab–Israeli wars, briefly with South Vietnam in the Vietnam War, and on both sides of the Indo-Pakistani War of 1965 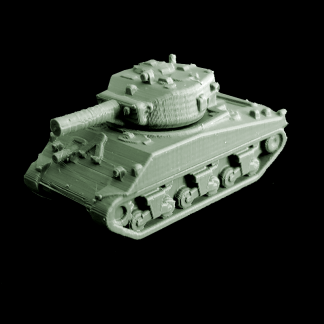