Whether fought between the Galactic Empire and Rebel Alliance, the Resistance and the First Order, or the Galactic Republic and the Separatist Alliance, the Star Wars saga is defined by massive space battles that pit groups of heavily-armed warships and dozens of smaller starfighters against one another. Soon, you’ll have the chance to enter these battles and test your mettle in some of the most intense and chaotic space battles in the Star Wars galaxy.

Featuring eleven cinematic scenarios—from team games to chaotic, eight-player, free-for-all battles—Epic Battles broadens the possibilities of X-Wing, creating an exciting new experience for players of all skill levels. In addition to the scenarios and rules for playing with more than two players, Epic Battles also introduces wings, an exciting new way for players to control multiple ships in formation using only a single maneuver dial. Wings work particularly well when flying in conjunction with huge ships, the largest class of ships available in X-Wing.

No matter if you’re going head-to-head with a single opponent or coordinating your attacks with a teammate, the new game modes you find in Epic Battles create an exciting new X-Wing experience. Read on for more of what to expect in the Epic Battles Multiplayer Expansion!

CMON and IDW Games are fusing their talents to bring Dragon Ball Z to the table top in 2020!

Players will get to create their dream “what if” showdowns as many of the iconic heroes and villains will face off against each other in an effort to determine who’s the strongest fighter in the universe. Stay tuned!

Paladins of the West Kingdom, available in October, 2019 (pre-order available now) is set at a turbulent time of West Francia’s story, circa 900 AD. Despite recent efforts to develop the city, outlying townships are still under threat from outsiders. Saracens scout the borders, while Vikings plunder wealth and livestock. Even the Byzantines from the east have shown their darker side. As noble men and women, players must gather workers from the city to defend against enemies, build fortifications and spread faith throughout the land. Fortunately you are not alone. In his great wisdom, the King has sent his finest knights to help aid in our efforts. So ready the horses and sharpen the swords. The Paladins are approaching.

The aim of Paladins of the West Kingdom is to be the player with the most victory points (VP) at game’s end. Points are gained by building outposts and fortifications, commissioning monks and confronting outsiders. Each round, players will enlist the help of a specific Paladin and gather workers to carry out tasks. As the game progresses, players will slowly increase their faith, strength and influence. Not only will these affect their final score, but they will also determine the significance of their actions. The game is concluded at the end of the seventh round.

As T-65 X-wings and TIE/ln fighters engage in frantic ship-to-ship combat, turbolasers from massive warships flash across the darkness of space, pummeling their targets. Soon, you’ll be able to launch your squadrons into bigger battles, coordinating your plan of attack between imposing warships and swift starfighters. Fantasy Flight Games is happy to announce three expansions for Star Wars™: X-Wing:

These expansions put devastating new options for your starfighter squadrons at your fingertips, letting you conduct deadly electronic warfare and unleash barrages of powerful turbolaser or ion cannon fire as you bring the full weight of the largest X-Wing ship class to bear against your opponents. The largest ships available in X-Wing, huge ships can be used during casual games of X-Wing, and they’re also great when used in conjunction with the Epic Battles Multiplayer Expansion.

CMON and Xplored are teaming up to bring players the next evolution in board gaming. Teburu is a gaming console that seamlessly integrates the physical and digital worlds, keeping players focused on the board and its components while the system takes care of game rules, enemies’ behavior, and storytelling events.

Groundbreaking technology senses where figures representing heroes, monsters and other gameplay elements are anywhere on the board. This information is transmitted seamlessly to any compatible tablet or computer running the Gamemaster App – no more hunting around in the rulebook. Make your move and the Gamemaster tells you what happens next.

Players can keep track of their own characters on Companion Apps running on their own smartphones networked to the Gamesmaster App, which is able to throw surprises at players with a malevolent intelligence never before seen in boardgames. What’s behind the door? The Gamemaster knows…

Roll the wireless dice anywhere, and Teburu does all the heavy lifting, taking into consideration player and monster statistics, equipment and other modifiers and displaying the final result instantly. No more math, just shoot zombies (with your dice)!

The first game on Teburu will be Zombicide Evolution – Las Vegas. It’s the game millions of Zombicide players the world over know and love, but evolved – faster, enhanced, and with a great campaign full of meaningful choices that will carry over a series of gaming sessions.

CMON’s CEO, Chern Ann Ng commented, “We are excited to bring new technology and gameplay innovations to tabletop games in the form of the Teburu. We expect this will both excite existing tabletop gamers and draw a whole new audience into tabletop gaming.”

Xplored’s Founder and CEO, Davide Garofalo noted, “CMON immediately understood the groundbreaking potential of our technology applied to board games, allowing us to bring an ambitious product to life. We strongly believe Teburu is the paradigm change this market has been looking for.”

Players will get their first chance to try the Teburu gaming system at Gen Con this August at the CMON booth (#417). Participants will be able to try out this new, fully-integrated style of gaming with demos of Zombicide Evolution – Las Vegas.

Free League Publishing  announced that Crusader Kings the Board Game will be released worldwide on August 1, 2019. The feats of arms, backstabbing, and love affairs of medieval Europe are being brought back to life at gaming tables everywhere thanks to a partnership with Paradox Interactive, with a debut next month in Indianapolis, Indiana at Gen Con 2019, with global retail to begin shortly after the convention.

In the medieval strategy soap opera of Crusader Kings the Board Game, your King or Queen will need to survive the dangers of invasions, plots, crusades, and marriage – the most important choice of all. You will find that the life of a medieval ruler is full of challenging events and if your ruler cannot survive, at least you can count on your heir – hopefully. Failure to raise a suitable successor could bring about the end of your dynasty, leaving you a mere footnote in your nation’s history.

Based on the popular computer strategy game series, Crusader Kings the Board Game moves the infamous ambition and scheming from the computer to the tabletop. Do you have what it takes to become a Crusader King? Rejoice, for you shall soon find out!

For more information on Crusader Kings the Board Game, or to inquire about retail opportunities or review copies, please contact pr@frialigan.se. 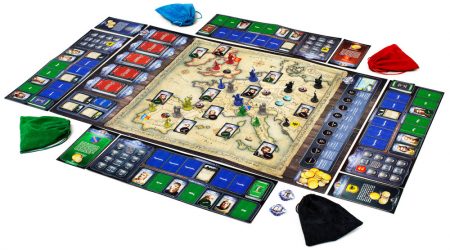 Fantasy Flight Games is pleased to announce Path of the Serpent expansion for Mansions of Madness—now available for pre-order at your local retailer or online through our website with free shipping within the continental United States!

For all its beauty, the jungle conceals many perils. From unrelenting heat and dwindling supplies to cursed idols and booby-trapped temples, any who would dare face these dangers are sure to long for the relative safety of the city they knew. Now in Mansions of Madness, you take on the role of Arkham’s bravest investigators who must step into the unexplored wilderness of the Amazon jungle and explore crumbling ruins, discover the secrets of lost civilizations, and stop a serpent’s curse before the world descends into chaos. In three new scenarios, you will battle horrifying serpent creatures, face stone monstrosities that come to life, and beat the ever-present danger of being lost to the jungle forever. Are your ready for a new challenge? 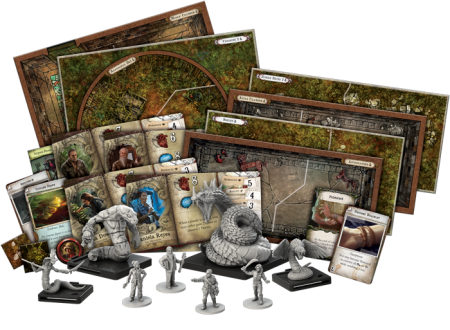 Pack your bags and prepare for adventure in the heart of the jungle. Once there, you could make the discovery of a lifetime…or become another soul lost to curiosity and ambition. The only way to find your fate is along the Path of the Serpent!

Pre-order your copy of Path of the Serpent (MAD28) from Fantasy Flight Games! This expansion will hit retailers in the fourth quarter of 2019.

WizKids is pleased to announce the upcoming release of Flotilla, a unique post-apocalyptic board game of exploration and economics!

In 1954, with an explosion over a hundred thousand times more powerful than even the wildest estimates, the Castle Bravo nuclear test obliterated the Bikini Atoll, and ruptured the Earth down to its mantle. As water levels rose in the aftermath, the remnants of humanity fled their homes and took to the sea. World leadership came together to build a massive Flotilla, mankind’s last bastion of civilization.

In this 3-5 player game, players will explore, salvage, trade, and build their way to the most victory points, and a place as the most powerful commander in this new society. It features two distinct and interwoven modes of gameplay, using a unique system where nearly every major component is double-sided. Players begin the game “Sinkside,” exploring the ocean with the skiffs, rescuing survivors, and diving for resources to sell or stockpile. At any point in the game, you may choose to turn “Skyside,” selling your skiffs, and using resources to improve and build the Flotilla itself. 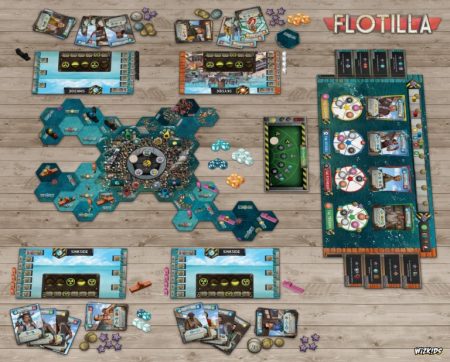 The components in Flotilla are unique, immersive, and interconnected. Your skiffs will be able to actually carry up to four resource barrels, and come in a unique shape for each player color. Artifact tokens slot in to matching spaces in a double-layered hub board, and art on the ocean tiles lines up to create a unique layout for your growing Flotilla each time you play. Your Crew cards also tell a story, with each crew member’s illustration changing as you flip them from their “Sinkside” jobs to their new “Skyside” roles.

The player with the most Victory Points is the winner, and it’s possible to win no matter when you go “Skyside,” if at all. In Flotilla, you’ll find significant strategic depth and variety, while giving players the freedom to tell their own story. Flotilla is coming soon, so preorder it at your Friendly Local Game Store today!