The 6mm sci-fi Neo-Soviet Ulyanovsk supercarrier SFS-1211 made its debut at Brigade Models.

At 115mm long, this is a huge model, the largest spaceship we’ve produced so far. The hull is resin, with four metal engines, three heavy gun turrets and a metal bridge to top it all off. It carries as many as fourteen fighter groups, along with the three battleship-class mass accelerator turrets and a myriad of secondary weapons. It has hefty shielding along with armour plating, so is a very tough nut to crack – you can find the Starmada-X playsheet here.

Brigade Models give us that sinking feeling with the release of some stellar sci-fi sunken/underground terrain models in 6mm!

The desert is a harsh environment, with the combination of sun, sand and wind making life difficult for anyone trying to eke out an existence among the dunes. Some colonists have tried to protect themselves from the climate by digging themselves into the terrain and building their houses, workshops underground. In some cases they’ve built above ground and then buried the structures under a layer of plascrete and sand, leaving just the doors and windows exposed, with a few vents and exhausts. 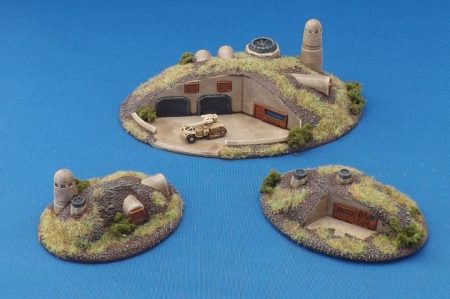 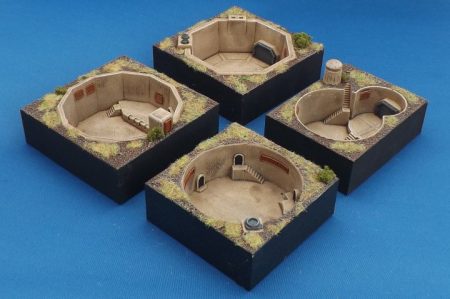 For want of a better name, we’ve called these ones Sunken Structures. They’re based around a courtyard sunk into the ground around 25 feet or so, with doors and tunnels leading off from the open central area. Windows and vents pierce the side walls and exhaust towers protrude above the surface. Access from ground level can be by simple stairs cut into the rock or elevators running up the side of the pits. Some are accessed through small entrance buildings on the surface above. One of the structures is an octagonal pit with a large workshop door off to one side, intended as a below-ground landing bay.

The models are one-piece resin castings. They’re all cast as simple square or rectangular pieces, and all are 25mm deep – the idea is for them to be modeled into a terrain baseboard or hill/mesa using 25mm thick insulation foam.

New out of the Brigade Models factory are a trio of support half-tracks for their 15mm Polish forces. The Wilk (Wolf) chassis carries either a pair of tri-barrel AA gatlings, a quad anti-tank missile system or a 12-barreled multiple rocket artillery system.

The Wilk is derived from the Suwalska half-track family, but with a flat-bed rear replacing the former’s passenger compartment. The turrets are of Soviet origin, bought in and retro-fitted with indigenous electronics and sensors.

The models can also see service in the Cecach Federal Army, a force from the Forlorn Hope novel and part of the Hammer’s Slammers universe.

Following on from the arrival of the new Victoria and Albert class battleships, the rest of the British capital ships get a similar makeover this week. The Agincourt and Benbow battleships plus the Audacious and Britannia battlecruisers have all been replaced by new resin-hulled models with separate turrets and metal parts. The new designs are similar in layout to the originals, but the multiple separate parts make for much improved miniatures.

The first is a pack of four resin Jetties, two plain and two with buildings moulded on. The pieces are 5mm thick and have detailing all the way round so that they can be used as jetties or piers projecting from land or as stand-alone islands.

In the Brigade Models Small Scale (15mm) Scenery range, they have updated and re-released their sound mirror models, replacing the old ones with slightly tweaked new versions and adding two new types of smaller acoustic mirror. These now come six to a pack, two each of three designs.

And in the City Blocks series, they have added two new designs. The first is a set of four inner curves that can replace the existing corner pieces, or when used together will make up a circular plaza. And finally, two end terrace blocks which can be used to terminate a row of city blocks. 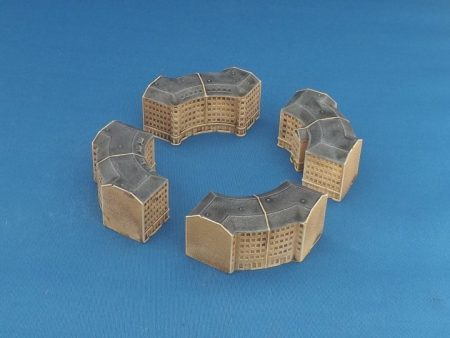 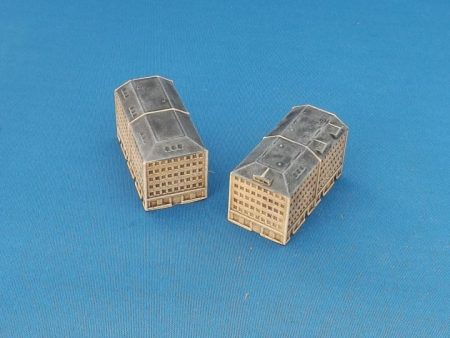 Brigade Models Neo-Soviet ground forces have recently been receiving all sorts of upgrades, with new types of tank and assault gun in both 6mm and 15mm scales.

The one thing they needed to support these new vehicles was an armoured infantry carrier capable of keeping up with the tanks. Well, today that arrives in the form of the new BMP-BM.

This vehicle is based on the chassis of the Bars tank, with a new superstructure capable of carrying six fully-equipped Guards riflemen. The rear-engined design precludes doors at the back of the vehicle, so access is via a two-piece hatch at the front next to the driver’s station.

Brigade Models brought out the first wave of their resculpted EuroFed spaceships in time for Salute, but this only replaced a small part of the existing fleet. T

They have now re-released a pair of capital ships, new versions of the Liberté battleship and Cerbere light carrier. These two have changed in design more than some of the other new models, being based on a similar hull that has the same design styling as the Milano and Umberto. At the other end of the scale they also have the diminutive Comète starfighter, tiny but with an amazing amount of detail for something so small.

The release also includes a fleet pack containing a Liberté and a Cerbere along with escorts, fighters and bases.