Large RPG Cities, just like Rome or Paris, have sewer systems for the primary purpose of drainage–to keep their streets from flooding. The sewers channel storm water away from the city.

Whether your RPG campaign is set in Balder’s Gate, Calimport or Waterdeep in the Forgotten Realms; Beneath the sprawling streets of Ravnica, or in the underground canals of Sigil in the outer planes, your adventures are likely to take you into the Sewers and Undercity….

PuzzleLock Sewers and Undercity is a 3d printable terrain for 28mm tabletop RPGs. The tiles connect like a jigsaw puzzle–there is no need for clips or magnets, and the tiles require no supports for printing.

There are 23 .stl files in the set, each one exquisitely detailed to create an immersive environment. The modular design will allow you to create an endless labrinth of Sewers and Undercity.

Explore a wealth of peril and personalities for the world’s greatest roleplaying game.

When you’re just starting out in the adventuring business, it might be nice to have a leg up. It can be a big help to have access to the powerful artifacts, expertise, and jobs that Acquisitions Incorporated (Acq Inc) has to offer a new franchise. Join Omin Dran, Jim Darkmagic, and Viari like never before with the new Acquisitions Incorporated campaign book for Dungeons & Dragons!

Set yourself up for success when pursuing your own fantasy-business endeavors, using all the ingredients you need to include Acquisitions Incorporated in your D&D campaign, to establish your own franchise, and take on specialized roles therein. Plus, there are always openings coming available… Just try not to think about why.

Here, for the first time ever, is the crossover between these two games: miniatures and roleplaying adventure meet in the Hyborian Age!

Developed closely with Monolith Entertainment, The Monolith Sourcebook provides players and gamemasters with a host of exciting material: new campaigns for both games, standalone adventures, and advice for creating original boardgame adventures using the roleplaying resources.

Get the most out of Monolith’s Conan boardgame with this essential sourcebook!

Riverhorse Games has announced they will be publishing Jim Henson’s Labyrinth – The Adventure Game RPG.

Jim Henson’s Labyrinth – The Adventure Game contains everything you need to enter the magical world of Jim Henson’s Labyrinth. This beautiful collectors item contains a full epic adventure which can be played both by expert role players using their favourite RPG rules system, and by fans of the Labyrinth who are not role players, using the streamlined rules system included in the book!

Jim Henson’s Labyrinth – The Adventure Game will be released in 2019.

WizKids has announced the release of the new D&D Icons of the Realms: Waterdeep: Dungeon of the Mad Mage .. what a mouthful to say, but a lot of minis included in the set!

In the city of Waterdeep rests a tavern called the Yawning Portal, named after the gaping pit in its common room. At the bottom of this crumbling shaft is a labyrinthine dungeon known as Undermountain, domain of the mad wizard Halaster Blackcloak who has seeded his lair with monsters, traps, and mysteries. This set of collectible figures perfectly represents many of the monsters and villains found throughout the 23 levels of Undermountain detailed in Waterdeep: Dungeon of the Mad Mage.

Waterdeep: Dungeon of the Mad Mage includes exciting new player characters & monsters like the Elf Cleric of the Grave and the terrifying Death Tyrant. Undermountain’s most infamous villains make an appearance, including the Mad Mage, Halaster himself and his ambitious apprentices. This set also includes several classic creatures such as the benevolent Flumph and the 3-eyed terror known as the dreaded Froghemoth!

Collect all 44 figures from Waterdeep: Dungeon of the Mad Mage, the newest set of randomly sorted monsters and heroes in our exciting line of D&D miniatures, Icons of the Realms.

Fantasy Flight Games is proud to announce The Lord of the Rings: Journeys in Middle-earth, a fully cooperative, app-supported board game for one to five players, inviting you to become the greatest heroes of Middle-earth!

The Lord of the Rings: Journeys in Middle-earth lets you embark on your own adventures in J.R.R. Tolkien’s iconic world, embodying heroes of the Free Peoples and fighting back against the oppressive might of Sauron. You’ll battle villainous foes, make courageous choices, and strike a blow against the evil that threatens the land—all as part of a thrilling campaign that leads you across the storied hills and dales of Middle-earth.

Each individual game of Journeys in Middle-earth is a single adventure in a larger campaign. You’ll explore the vast and dynamic landscapes of Middle-earth, using your skills to survive the challenges you encounter on these perilous quests. As you and your fellow heroes explore the wilderness and battle the dark forces arrayed against you, the game’s free companion app guides you to reveal the looming forests, quiet clearings, and ancient halls of Middle-earth, while also controlling the enemies you encounter. Whether you’re venturing into the wild on your own or with close companions by your side, you can write your own legend in the history of Middle-earth. 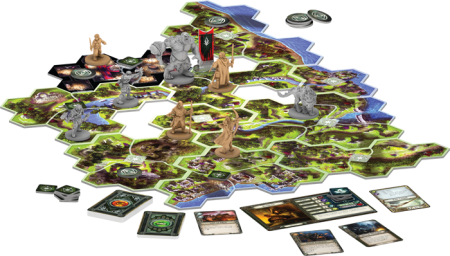 Brave adventurer, Free League Publishing announced that the Forbidden Lands RPG has released worldwide on the 6th of December 2018. All rogues, raiders, treasure hunters and scoundrels may now enter the land beyond the mountains.

The Forbidden Lands RPG is a retro-fantasy game and a brand-new take on classic tabletop roleplaying.

My dear friend, have you heard that the curse is gone and that the Blood Mist has lifted? Forbidden Lands can now finally be reached. Do you dare to travel into the unknown lands with me?

Just imagine, it is an unexplored realm filled with treasures left behind… A magical journey into the unknown awaits us. Will you join me in the hunt for ancient treasures and fight whomsoever gets in our way? Let us leave this wretched reality and build a new world for ourselves on the ruins of the old. What say thee, do you want to be one of the first raiders of the Forbidden Lands?

If it will be dangerous? Of course, but what does it matter, friend? Together we laugh in the face of danger and make our mark on that cursed world. Together, we will survive long enough to tell the tale. But we must hurry, before the others take it all…

In the sandbox survival roleplaying game Forbidden Lands, you and your friends will be playing raiders and rogues bent on making your own mark on a cursed world. Discover lost tombs, fight horrifying monsters, wander the wilderness and build your own stronghold to defend.

Forbidden Lands is a legacy game, in which your actions will permanently change the game map, turning it into a living chronicle of your adventures. The unique rules for exploration, survival, base building and campaign in the game play can easily be ported to any other game world.

Terrinoth is in peril and now the realm looks to you for a savior in Heroes of Terrinoth from Fantasy Flight Games!

The restless dead rise in the Mistlands, the Bloodguard sow discord in the Free Cities, and even the Land of Steel is no longer safe as tales of marauding goblins travel along the roads. You must step into the shoes of a hero and journey into the darkest dungeons and caverns, seeking out the dangers that threaten Terrinoth and casting them down. And if you happen to get rich along the way… well, what’s the harm in that?

In this cooperative card game of questing and adventure, one to four players choose from an array of twelve distinct heroes, spread across four possible archetypes: healer, warrior, mage, and scout. Each hero has a special ability reflecting the skills and talents they’ve learned along the way, and as you gain more experience through your quests, you’ll have the chance to grow from a fledgling student to a true master of your art and specialize in different classes.