Vaunted as a high honour among the Legio Custodes, the role of Custodian Venatari is reserved for a scant few – those with proven skill and mastery of the rare, sophisticated flight system and archeotech weapons they wield. The Venatari are specialists in hunting direct threats to the Emperor amidst the sprawl of the Palace walls and its spire-tops. While shield companies patrol the vast hallways and cavernous rooms of the Imperial Palace, the Venatari are elevated above, making their domain among the rooftops and spires, overseeing and assessing the threat of all who enter or leave. Their predatory instincts have earned the Venatari the nickname of ‘the Emperor’s Hunting Eagles’, standing as immobile and vigilant as the birds of prey of Old Earth atop the mountain peaks before swooping into a killing dive.

A Custodian Venatari Squad is an Elites choice for a Talons of the Emperor army list. The unit’s rules are available as a free pdf download from the Forge World website.

The Legio Custodes Custodian Venetari Squad includes three complete miniatures, each cast in finest-quality resin. Each Custodian Venatari may be equipped with a Venatari lance or an archeotech kinetic destroyer and Tarsus buckler, and the set includes the components to assemble all three miniatures with either weapon option.

Retrofitted to allow the Sicaran hull to carry heavier firepower, the Omega is a formidable tank hunter. It utilises the speed provided by the Sicaran’s engines to apply overwhelming short range firepower in battle, racing forwards to ambush and obliterate the lumbering siege tanks of enemy columns.

Its simplified, some might say crude, systems are all capable of being produced by the lesser forges attached to many Space Marine strongholds, allowing them to replace losses of more complex vehicles even as the various Forge Worlds became isolated by war and mistrust at the height of the Horus Heresy.

This is a complete multi-part resin kit, in which you’ll find all the components you need to assemble a Legion Sicaran Omega Tank Destroyer. Sharing a hull with the sturdy Legion Sicaran Battle Tank, the standout feature to this model is the 2 enormous plasma cannon that dominate the turret head. These cannon are fed power by massive arrays of tightly-bound cables and both feature their own ammo feed, as well as 6 plasma flasks. Other features that distinguish this model from the Battle Tank on which it is based are the complex sensor array and window visor; the rest of the kit includes 2 lascannon, 3 heavy bolters and all the gun mounts, tracked wheels and large, brutal-looking exhausts you would expect.

This kit comes as 52 components. Rules for fielding the Legion Sicaran Omega Tank Destroyer in games of Warhammer 40,00 and The Horus Heresy are available as a PDF download.

The new Barracuda flier and a set of “experimental” Battlesuits is available to order from Forge World.

The Tau Barracuda AX-5-2 is a multi-role fighter, able to take on enemy fliers as well as attacking heavily-armored ground forces. You can pick up a single, or buy a pair, so you can have your own wingman.

These are available to order now with shipping to to start on the 29th! 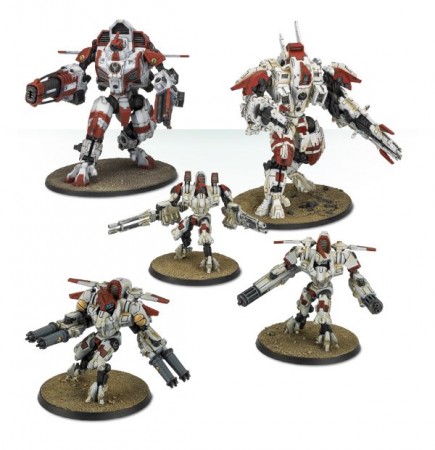 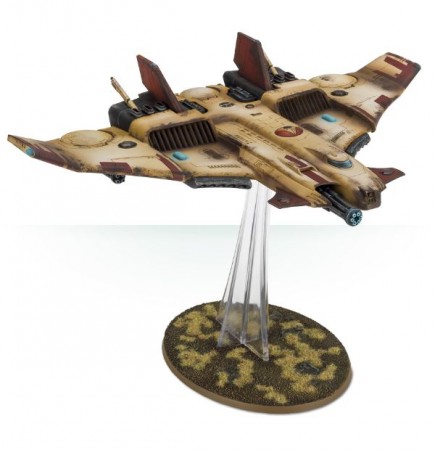 The Mechanicum Ordinatus Sagittar is a massively destructive war engine, as rare as it is potent. Similar in design to the Ordinatus Ulator, the Sagittar differs in its primary weapon being a Volcano Cannon of prodigious power.

In the time of the Great Crusade the Ordinatus macro engines were rarer than even the Battle Titans of the Legio Titanica, and only a handful of Forge Worlds had the resources or indeed the doctrinal blessing and religious authority to produce or maintain such embodiments of the Omnissiah’s divine wrath. Such was the sacredness of these machines above all others, that an entire subcult of the Mechanicum was devoted to their worship and propitiation.

The Ordinatus Sagittar carries a trio of Volkite Culverins as its secondary armaments, whilst its primary weapon is a Belicosa pattern Volcano Cannon, more often carried by Warlord class Battle Titans. An ancient pattern of weapon whose destructive power is comparable to many shipboard cannon and planetary defence lasers, few mobile weapons platforms are capable of mounting the Belicosa simply due to its savage power requirements. When engulfed in the cannon’s cohesive light, the strongest fortress walls may be reduced to glowing embers and the most resilient armour to molten slag and vapour.

If Games Workshop gives you anything, it’s options. Now Forge World is giving you even more options, by releasing 17 different weapon kits in their webshop!

There’s combi-weapons, volkite culverins (not even sure what those are, but I can order them), autocannons, rotor canons, heavy flamers, heavy bolters, volkite chargers, volkite calivers (same with those two), plasma guns, seeker bolters, graviton guns, flamers, melta-guns, and four different types of bolters. 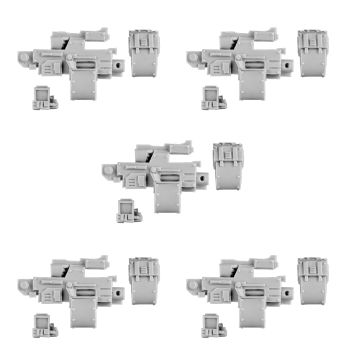 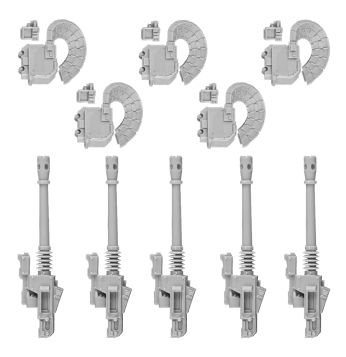 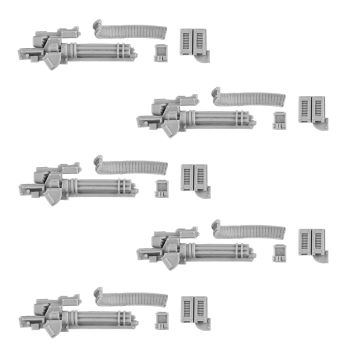 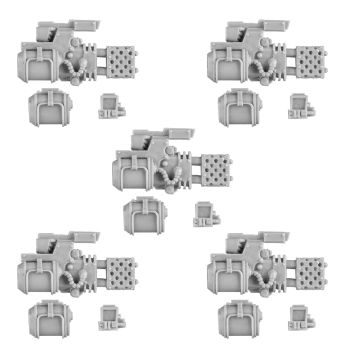 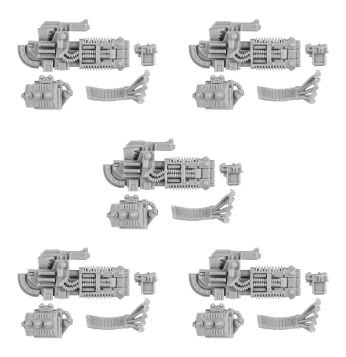 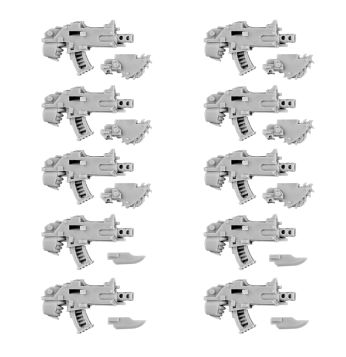 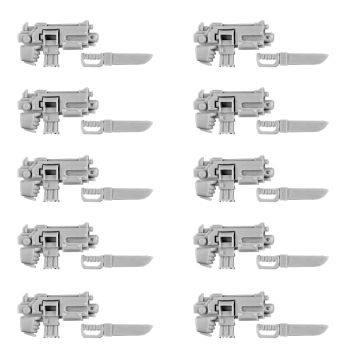 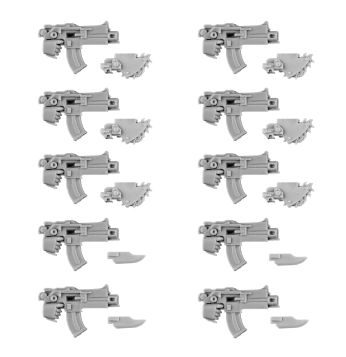 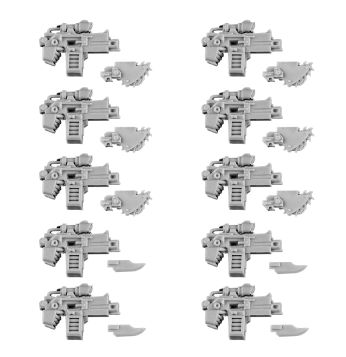 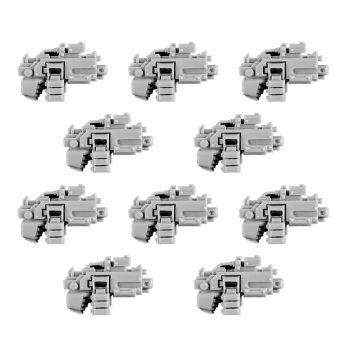 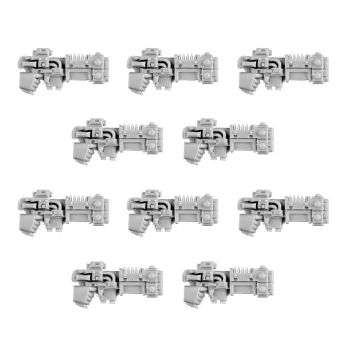 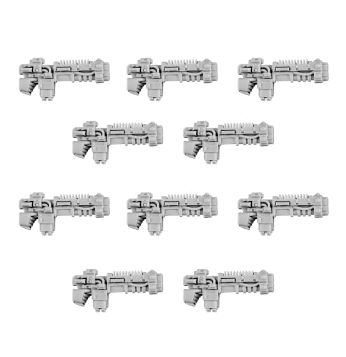 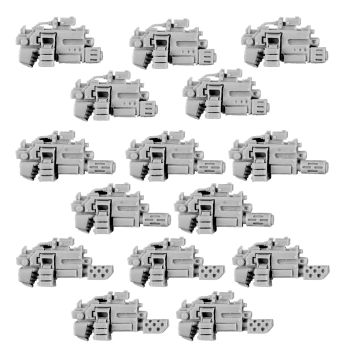 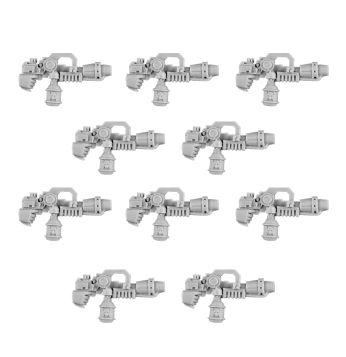 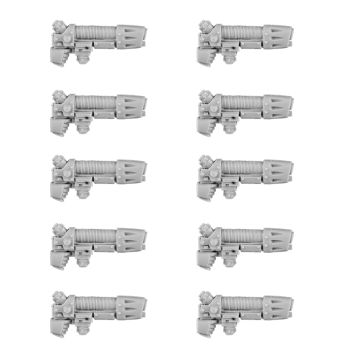 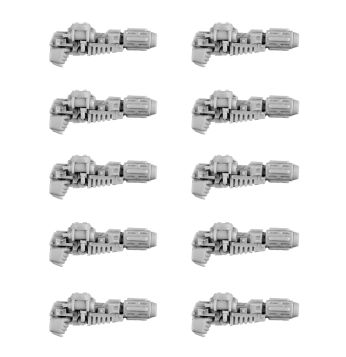 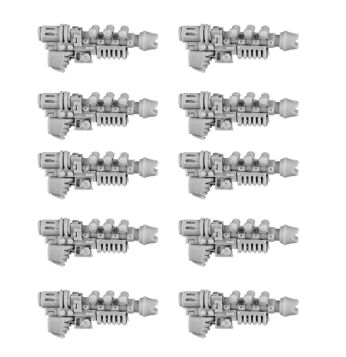 Preorder the new Solar Auxilia Veletaris Storm Section with power axes from Forge World for your most awesome WH30K army.

Amazing poses, with just the right amount of detail. Not at all flashy or ornate either which is rare for GW/ForgeWorld!

Usually forming part of the Solar Auxilia’s Infantry Tercios, Veletaris Storm Sections also serve as the Household Retinue of commanders and Lord Marshals. When doing so they often bear ceremonial power axes which, whilst finely wrought, are suitably deadly in battle. The elite of the Solar Auxilia, who are themselves the best of the Imperial Army, they are considered second only to the Space Marines of the Legiones Astartes in combat.

Consisting of 10 models, this set is equipped with power axes and encased in reinforced void armour. A complete multi-part resin kit that makes ten models. It includes ten 25mm round bases.

Tau Supremacy armour is larger than any other current class of battlesuit. It is intended to meet a threat that the Tau Empire has not yet prepared for; the defence of worlds within their growing domain from the counter-expansion forces of other races. Lacking the manoeuvrability of other battlesuits, the KX139 Ta’unar Supremacy Armour was designed for static defence, carrying massively destructive, long range weapons.

Armed with a pair of Tri-axis Ion Cannon and a Pulse Ordnance Multi-driver, this KX139 Ta’unar Supremacy Armour Battlesuit is ready to engage enemies at range and dominate the battlefield.

Forge World have new figures available for preorder for Age of Sigmar and WH30K.

Tamurkhan the Maggot Lord is the new Age of Sigmar figure. Atop his Toad Dragon Bubebolos, he brings all sorts of rotting death and destruction to his foes.

Meanwhile, far in the future (or just in an alternate reality-bubble if you prefer), Lord Commander Eidolon commands the Emperor’s Children to their own form of death and destruction.

Both of these figures can be ordered now and will begin shipping next week. 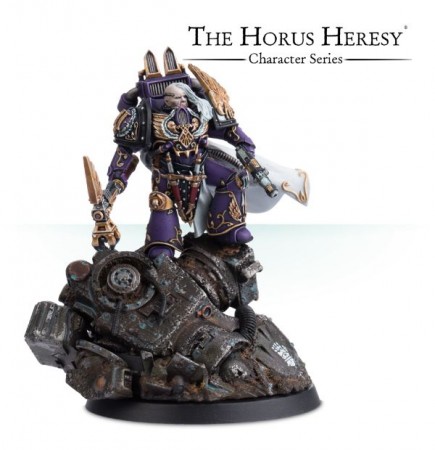 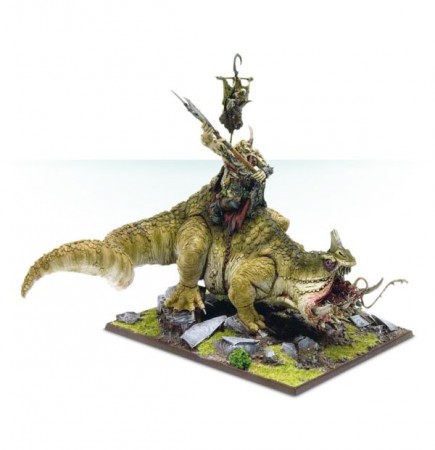