Fantasy Flight Games is proud to announce Masters of the Court, a Crane Clan Pack for Legend of the Five Rings: The Card Game!

Masters of the Court spotlights the Crane Clan with 78 new cards (three copies of twenty-five different cards and one copy each of three different cards) for Legend of the Five Rings: The Card Game. Here, you can look for an emphasis on the Crane’s skilled Duelists, their well-spoken Courtiers, and their ability to lock down their opponents with powerful conflict cards.

Amidst the honorable samurai of the Emerald Empire, none stand quite as virtuously as those of the Crane Clan. It is by the grace and excellence of the Left Hand of the Emperor that peace is maintained, for their mastery of law and diplomacy is unparalleled. The descendants of Lady Doji helped codify the laws that govern life in the Empire, simultaneously defining the social order and modeling it with elegance.

Join the Crane with Masters of the Court (L5C18), releasing in the second quarter of 2019 and available now for pre-order from your local retailer or fantasy flight games! 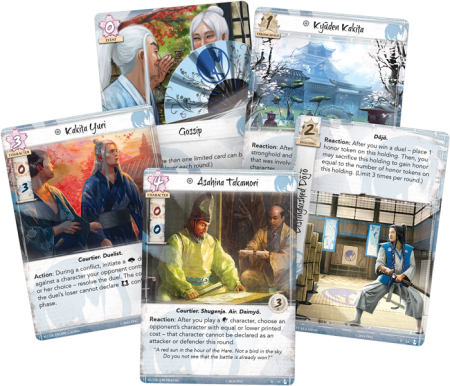