Osprey Games is delighted to announce its first miniatures board game, Martin Wallace’s Wildlands, scheduled for worldwide release in Q4 2018.

In this fantasy game for two to four players, rival factions struggle for power in the ruins of a once-great kingdom, now known simply as the Wildlands. Each skirmish sees players attempt to outwit, outmanoeuvre, and overpower their opponents as they fight for riches and glory, scoring points by defeating enemy characters and collecting treasure. Familiarity with your favoured faction will help, but adaptability is the key to victory, as a semi-randomized set-up and double-sided board means that no two battles will tell the same tale.

The vivid world of Wildlands is brought to life through the artwork, board, and the twenty unique miniatures included in the game. Sculpted by Bobby Jackson and Tim Prow, they portray a wide range of characters, from powerful wizards and cunning gnomes to hulking beasts and mighty warriors.

The great evil has fallen, and has taken the capital with it. Where once there was a kingdom, there is now only the Wildlands. In a lawless fantasy world, you must band together for survival, treasure, or maybe even glory. Players control rival factions, each with a unique deck of cards dictating their abilities across the battlefield. Some focus on ranged prowess, some on raw strength, and others on the bond between characters, offering a wide range of playstyles to explore.

For years he’s been the law in Mega City One, but now it’s time for Judge Dredd to bring justice to the rest of America. It’s time for him to venture into the Cursed Earth.

Featuring competitive, co-operative and solo player modes and brand-new, specially commissioned artwork, Judge Dredd: The Cursed Earth is an immersive sci-fi western, in which players must lead a team of judges against dinosaurs, mutants, and the Cursed Earth itself in search of an object of immense power before it falls into the wrong hands. As they scour the wastelands, the team will encounter a host of iconic 2000AD characters that will push their resources and abilities to their limits. On an impossible journey through radioactive hell, can even the judges survive the Cursed Earth?

Escape from Colditz, a title originally published by Gibsons (UK) and Parker Brothers (US) in the 1970s, is back in a new edition from Osprey Games.

The new version ($65 SRP) has new art, revised rules, wood pawns, cards, a large board, and a 32 page history book. The box also includes the original rules for those nostalgic for the game played in their childhood.

Escape from Colditz has most players in the roles of Allied soldiers attempting escape from the infamous World War II Nazi prison and one other as the guards trying to keep them locked up. One of the game’s designers was actually one of the few prisoners who managed to escape. 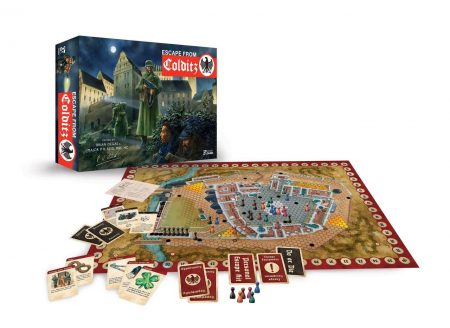 Osprey Games is thrilled to announce that it will be publishing a new edition of Odin’s Ravens by Thorsten Gimmler! Despite its enduring popularity, this classic family game, in which players build a board out of cards and race their ravens around the world, has been out of print for many years.

Odin’s Ravens is one of the most fun, quick-play family games I’ve ever encountered. The chance to create a new edition of this game as part of the Osprey Games line-up was just too good an opportunity to pass up. By combining Thorsten Gimmler’s game design with the artwork of Johan Egerkrans, we are producing something really special – a great game that is also a little work of art.

Osprey Games is pleased to announce that its first board game, The King is Dead, will be available in limited quantities for purchase at GenCon.

The game is set in Britain just after the death of King Arthur. Players are potential claimants to the throne who operate behind the scenes manipulating the power held by various factions, to make sure that in the end, they have the most influence in the most powerful faction. It is a dangerous game, however, and if the players cause too much chaos, they will leave the door open for Saxon Invasion.

Created by Peer Sylvester, this game of politics and power-struggles works equally well with 2, 3, or 4 players. The game will be available through general release in September.  If you can’t make it to GenCon you can preorder through Osprey’s website now.