Zombicide: Green Horde is the cooperative miniature board game from CMoN and comes packed with undead greenskins and mighty survivors. This official Zombicide paint set expansion comes with 6 Warpaints, designed to paint the undead hordes of Orcs, Goblins and evil Necromancers.

The Army Painter Green Horde paint set is an expansion to the 10 paints in the Zombicide: Black Plague paint set and will allow players and painters the full capacity to paint medieval fantasy zombies of all kinds as well as the brave hero survivors set out to battle the evil.

Steamforged Games and Secret Weapon Miniatures have both announced a new miniatures paint line this week.

Steamforged Games Ltd is proud to announce that we are going to be working with Meg Maples on the development of a brand new range of miniature paints. This will be a carefully selected and curated range of paints, designed to enable miniature painters of all skill levels to deliver compelling results. Incorporating classic paints, inks, metallics plus a brand-new set of technical mixes that transform the way you paint…but more details on this soon!

Secret Weapon Miniatures has (sort of) announced that they’ll be coming out with a new line of acrylic paints. These aren’t just washes and pigment powders, but “full” paints, themselves.

The Army Painter has announced a new expansion pack to their Zombicide Paint Set.

The Zombicide Games series from CoolMiniOrNot and Guillotine Games currently includes 3 boxed games and expansions: The Zombicide Boxed Game from Season 1 and the 2 boxes: Prison Outbreak and Toxic City Mall from season 2.

The Warpaints Toxic/Prison Paint Set will be available for worldwide release at GenCon in August and will be in retail stores around the globe on Monday 18th August.

HobbyZone company has added to its offerings a new product, the Corner Paint Stand

Thanks to its construction with an angle of 90 degrees, you can maximize the use of your workplace

Games Workshop makes it easier to get the paint colors you need to make your army look like the ones in White Dwarf with their one-click paint collections for every Warhammer army.

The Army Painter celebrates their upcoming Warpaints metal rack with an additional 6 Warpaints colours. 4 of these will be new amazing colour toned Quickshade Inks.

Plastic Soldier Company are delighted to announce that their new Warsprays have arrived and are now shipping!! 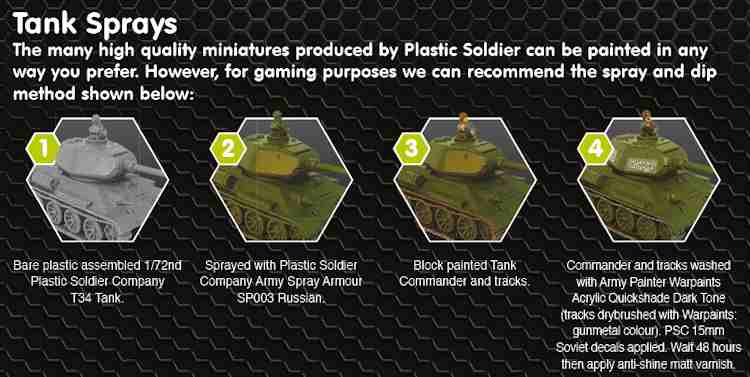