Tim Greene, who, as a keen historical gamer and prolific rules writer, has penned a fantastic army list for the Pike & Shotte rules allowing you to field Japanese Samurai armies.

Warlord Games know lots of players enjoy collecting historical Japanese forces, so they were very happy to publish Tim’s list so that anyone who wants can make use of it.

Out now from Warlord Games are their new command groups for your Ottoman Janissaries and Casualty Markers in the Wars of religion 1524-1648.

The Ottoman Empire was a serious threat to Christian Europe throughout the 16th and 17th centuries. The expansionist policies of Suleiman the Magnificent in the 1500’s had seen a huge Empire carved from Eastern Europe, North Africa and east into Asia. The driving forces behind this army were the expanding Janissary Corps of infantry and the feared Sipahi cavalry. These ‘household troops’ were backed up by a wide array of feudal troops from across the Empire.

Now you can mark your heroic sacrifices with the new Casualty markers, ideal for use as unit-fillers, objectives, or simply adding extra interest to your rank and file units.

The Ottoman army is a joy in its sheer diversity, fantastic shock troops mixed with levies offers a challenge to any general, although you can always rely on the very capable artillery. Although certainly not a typical ‘Pike & Shotte’ army, having no pike regiments, the Ottoman Army was too influential on European warfare of the period to be omitted from the Pike and Shotte Rulebook. 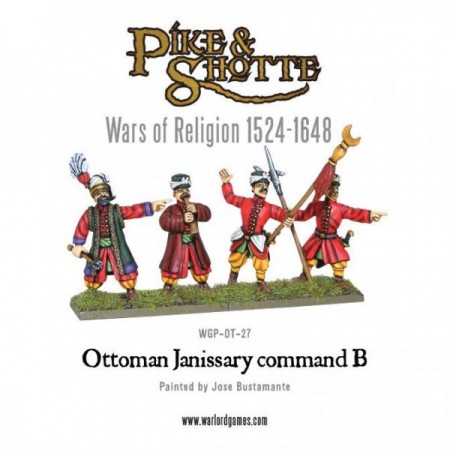 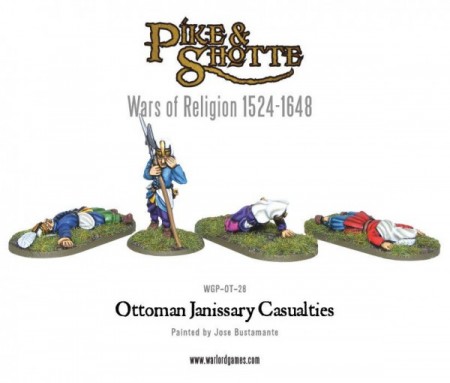 The musket – the mainstay of your army – was first invented by the Spanish in the early 16th century – and were originally designed as a much heavier weapon intended to be mounted upon fortified walls. However they were soon adapted to be used with a simple forked rest which made for a much more flexible (and devastating) weapon.

They remained heavy and largely unwieldy – so it would tend to be the fittest and strongest of men that would be drafted into musket units rather than the pike, simply because they were more likely to be able to man-handle the heavy guns.

It was only in the 1630s that the design was further refined to make them truly portable and able to be operated without the need for the forked rest (although the rest still continued to be used widely, as it offered additional stability and therefor accuracy.)

The effectiveness of the musket was further increased, particularly if in the hands of veterans, with the introduction of the Bandolier – a series of flasks, each of which contained enough powder for a single charge – reducing reload time, and making ammunition rationing much more easy and accurate. 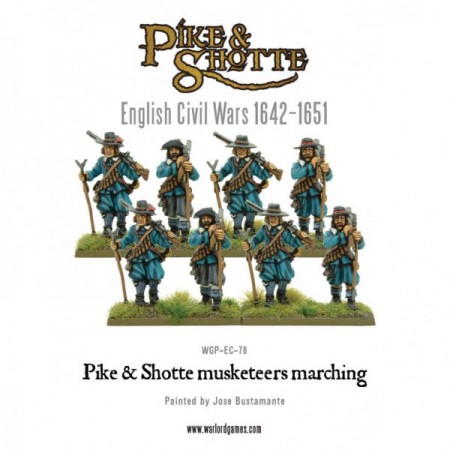 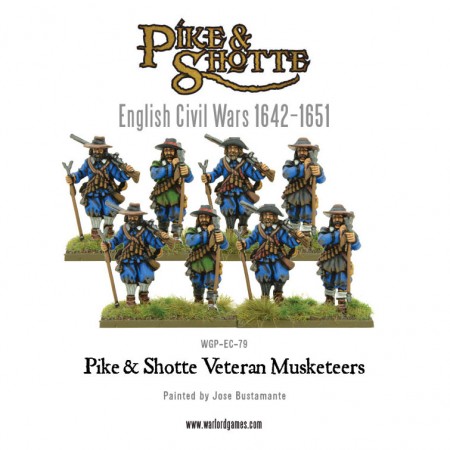 The first Ottoman release is the box set – which contains 24 metal miniatures that can be used to represent a Janissary orta. There are 12 miniatures with firearms and 12 with melee weapons that highlight the both the uniformity and diversity of the Janissary formations.

The Janissary Corps was founded in 1383 by Sultan Murad I to provide him with well-disciplined and loyal troops for his expansionist campaigns. They were recruited from Christian vassal states of the Ottoman Empire in Europe by the ‘devsirme’ system of taking young boys aged 6-14 years and converting them to Islam. These children were indoctrinated and raised in an environment of harsh discipline and training, resulting in a fearsome fighting force.

The Corps was divided into ‘ortas’, the equivalent of a battalion, and at the height of the Janissaries’ powers in the late 1500s there were 196 ortas. These were divided between frontier troops (Cemaat), Sultan’s Household and Bodyguard formations (Beyliks), provincial reserves (Sekbans) and cadet troops (Ajemi). Each orta was led by a Cobaci or ‘Soup Maker’, a title that indicated humility before the Sultan, and an Asci Usta (Master Cook). Culinary traditions played an important role throughout the Janissary Corps as successful leaders should be able to provide for their men.

The Thirty Years War was a series of conflicts that ravaged large areas of Europe, especially the German provinces, from 1618 to 1648. These conflicts centred on the Habsburg Holy Roman Emperors, Ferdinand II and Ferdinand III, and their opponents. Although viewed by many as a religious war between Catholic and Protestant nations, its roots and causes were also politically motivated. The combination of religious fervour and the political ambition of the European superpowers were to pit vast armies and mighty leaders against each other. The devastation caused by decades of fighting had truly turned Europe into the ‘Devil’s Playground’.

This supplement for Pike & Shotte describes the history, armies, personalities and battles of the Thirty Years War. Included are scenarios based on some of the famous battles and army lists for the main protagonists. 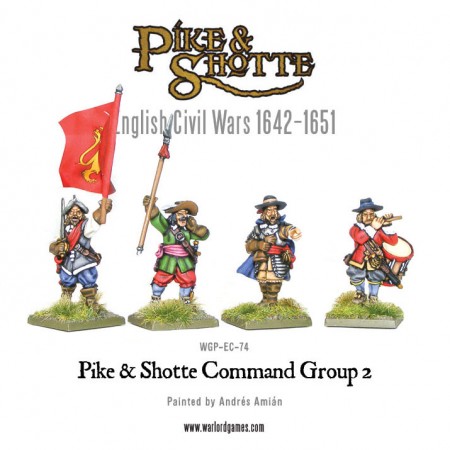 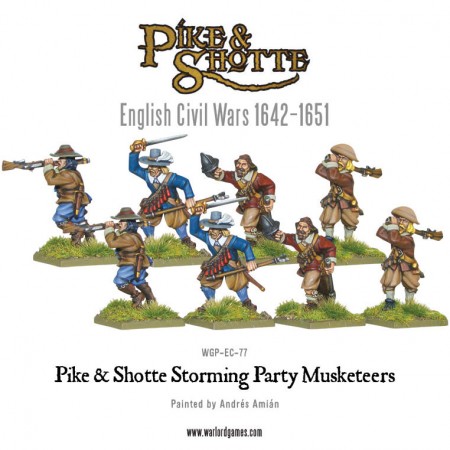 Warlord Games continues their expansion of their Pike & Shotte line with their new Storming Party Musketeers and a new Command Group.

Along with our first Pike & Shotte supplement The Devil’s Playground and the smashing Ordnance Battery we have a second Command Group and and a Musketeer Storming Party released ready to take part in your conflicts during these periods.

Officer. This officer is a classic study he is richly dressed, in old fashioned jacket and possibly has served on the continent himself. He will be ideal for all early armies, as Royalist, Parliament or Covenanter and will serve as a captain or lieutenant of foot. He is encouraging his regiment forwards and pointing them towards the thick of the battle.

Ensign. This fellow is a classic Ensign, with sword drawn and dressed in a cassock. Again he could be used in all armies, Rebel, Royalist, Scots or Montrose.

Drummer. Every Company fielded at least one drummer and our fellow is neatly attired in a posh jacket Being a warlord Drummer, he is carrying a sword for close defence.

Sergeant. We asked for this sergeant to be a hard-bitten professional who has seen a thing or two in his time. He is doing what sergeants do best, shouting! He could be slotted into any Civil war army.

Used to storm breaches as a forlorn hope or the men to defend the fortifications, these were the toughest in the army and a privilege to command!

Warlord Games brings some extra firepower to the 17th century battlefields of Pike & Shotte with their new Ordnance Battery.

It was a rare thing for a general in the 17th Century to take to the field without an artillery train to intimidate and pulverise the enemy lines. These cannon and mortars were terrifying weapons, belching smoke and flames with a frightening roar that no simple country lad was likely to have heard before.

The cannon’s range of a thousand yards or more, although inaccurate at such extreme distances, could deliver its solid iron cannon balls to smash through the tightly packed enemy ranks to devastating effect.

A wily master gunner would position his guns where they could do the most damage whilst not risking them to the enemy – it being a great shame to lose ones guns in battle, not least because of the enormous cost incurred in manufacturing, transporting and crewing them.

This box has three mighty weapons carefully protected by well-built gabion and wicker work defences, with the gunpowder barrels safely stowed in pits. Served by stoic crews and supported by a Sentinel, Master Gunner and an Engineer, these will wreak havoc in your opponent’s battle lines! 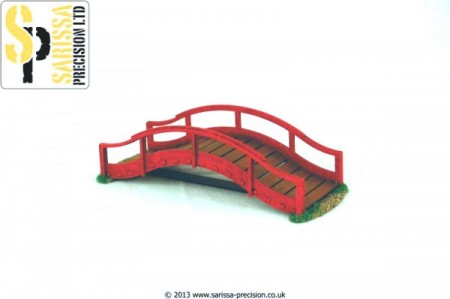 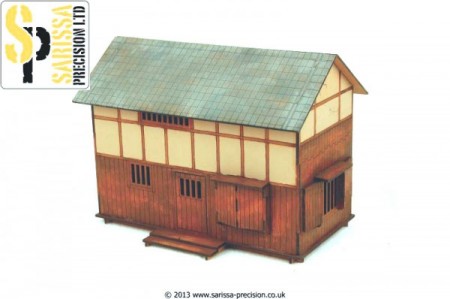 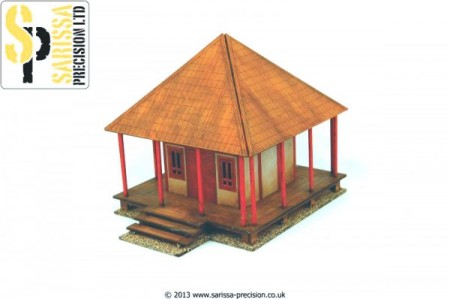 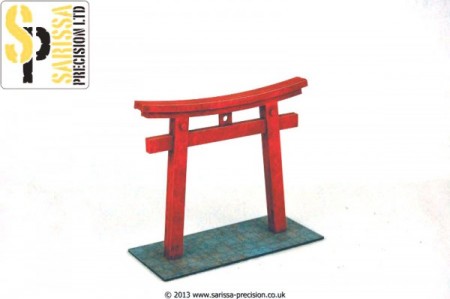 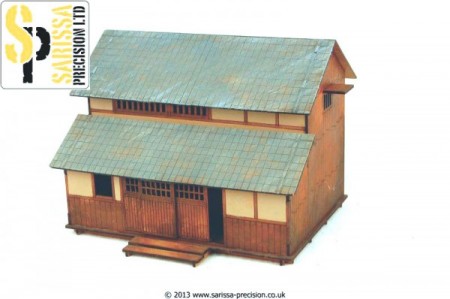 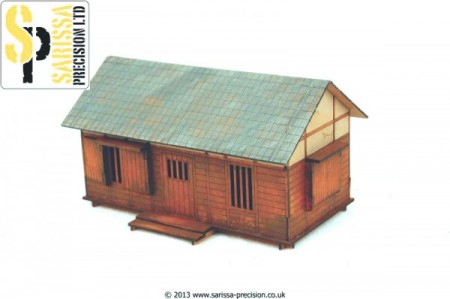 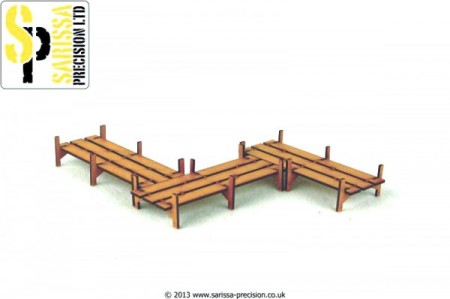 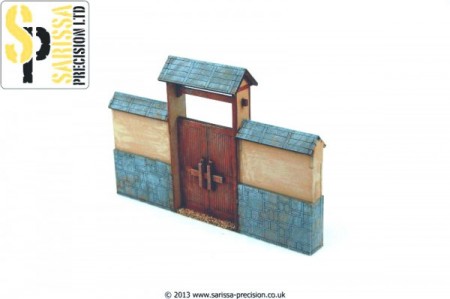 Warlord Games  have released a series of 28mm scale terrain for use with their new Samurai Army Lists for Pike & Shotte or any other far-east inspired games.

If you enjoy the occasional bit of Samurai action, then this range of laser-cut wooden terrain from Sarissa Precision is just what you need.  Multiple styles of houses, temples and shrines, two types of bridges, walls and gates, and a Torii gate