The galactic battles of Star Wars™: The Card Game have been played out on countless tabletops, transporting players to a galaxy far, far away. You have fought with both the light side and the dark. You’ve learned the ways of the Force, mobilized soldiers and massive navies, and plunged into the seedy underbelly of the Star Wars galaxy.

As the conclusion of the Alliances cycle, Promise of Power brings many of the themes of the cycle to their triumphant conclusion. Among its cards, you’ll find a thematic dive into the climatic end of Star Wars: Rebels Season 2, support for your Imperial Fighters, and reasons for you to bring multiple factions together in a single deck. With recognizable characters like the Inquisitors and Ezra Bridger to add to your decks, every Star Wars: The Card Game player will find new objective sets to enjoy in this Force Pack.

Fantasy Flight Games is proud to announce Promise of Power, the final Force Pack of the Alliances cycle for Star Wars: The Card Game!

Throughout the Alliances cycle, you’ve been encouraged to forge new alliances across affiliations. Jedi may work closely with the Rebel Alliance or the Smugglers and Spies of the galaxy. The Sith may rule an empire, wielding the Imperial Navy and Scum and Villainy alike as weapons against the light side. For many, these alliances make them stronger—the whole becoming greater than the sum of its parts. But for some, unlikely alliances can lead to nothing but turmoil and chaos.

Promise of Power is the final Force Pack of the Alliances cycle, marking the climactic conclusion of the cycle. With ten new objective sets (two copies each of five distinct sets), this Force Pack continues to reward players for melding affiliations together in a single deck. Promise of Power also introduces plenty of characters from Star Wars Rebels, bringing a new version of Ezra Bridger, Cikatro Vizago, and more Inquisitors into the game.

In addition to being the final Force Pack of the Alliances cycle, Promise of Power marks the completion of Star Wars: The Card Game. Over the past five years, Star Wars: The Card Game has seen five deluxe expansions and six cycles of Force Packs, ranging from the Battle of Hoth, through the pilots of the Rogue Squadron cycle, the forest battles of the Endor cycle, and the most recent changes of the Opposition and Alliances cycle. With the conclusion of the Alliances cycle, the game will be complete, and the Star Wars World Championships in May will be the final Organized Play World Championship for the game. 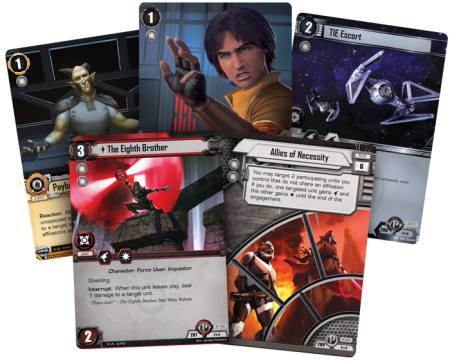