Written by Anatoli on April 12th, 2015 at Anatoli’s Game Room

Robinson Crusoe: Adventures on the cursed island is a worker placement co-op game for 1-4 players where you take on the role as castaways trying to survive and escape 6 varied scenarios.
It’s a game with a very strong theme, and a game that can be extremely unforgiving and difficult if you have bad luck, make poor decisions and/or the scenario objectives work against you in perfect synergy.

Each scenario is set on an island and has its own starting conditions, objectives and special rules. As such most of the 6 scenarios included in the game play as a completely new experience. Being a co-op game it is fully suited for single-player gaming as well – in such cases you randomly pick one character and play with Friday and a dog. The first scenario is really a take on Robinson Crusoe, you are shipwrecked and have to build a huge fire to signal to ships that start to pass by the island on a certain turn. Beside building the bonfire you also have to gather food not to starve to death, build a shelter not to freeze to death, build improvements that can stand against the increasingly bad weather and possible wild animal attacks.

You also have to gather resources by foraging or hunting wild animals which can be extremely dangerous if you don’t have good enough weapons, and you can also build a select few inventions that are randomized and available at the start of each scenario. The inventions aid you with additional worker tokens which can be placed on specific actions or by giving you some other valuable bonus such as an increase to your weapon weapon/defense stats etc.

To sum it all up, there is a lot to do and you have to do it quickly – and most of the time you don’t have enough workers to do everything that need to be done each turn!

Each island is randomized during each game, only the starting locations remain roughly the same. When you explore the island you uncover map tiles which provide new resources that unlock certain type of invention cards – for instance steep grass is needed for making the Rope invention. And as you explore you can uncover treasures or traps, special locations and move your camp from the beach inland onto a map tile that provides better shelter or resources. 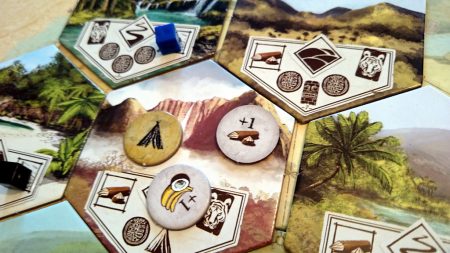 The game mechanics are simple and clever and encourage co-operation if you play with multiple people. Each player character gets two tokens that can be placed on whatever actions you like. If you place a single token you need to roll 3 action dice that check whether: 1) You hurt yourself during that action, 2) whether the action was successfull and 3) whether a random event occurs during that action. In other words, taking actions with a single player token is risky. On the other hand, if a player places two tokens, or if two players help each other out by placing one token each on an action, that action automatically succeeds and you don’t roll any action dice. Of course, with the amount of work and actions that need to be done each turn, you must spread your forces thin more often than you would want.

So far Caroline and I have played scenario 1-5 out of 6 and find them to be quite different in style and range from moderate to extremely difficult to win. We find that the first scenario may be the most “fun” since the game throws both wild animal attacks and increasingly bad weather into the mix and makes you experience the environment at its most extreme. Then there is scenario 5, Cannibal Island, which is fun but extremely challenging, we still have to win that one a single time.

I myself wonder about the challenge level of the game, and how it may tune itself up and down the difficulty scale depending on the number of players. For each player character you need 1 food at the end of each night phase or else you take health loss from starvation, things are also cheaper to build if you are 1-2 players. However playing with more people building inventions and completing random events get easier as you have more player tokens to place on the board – on the other hand building stuff and finding enough food each day becomes a much harder task. I also have not attempted to play a solo-game with only Friday and the Dog as companions, that ought to provide an interesting experience as well.

As a whole I really like this game but there is one big flaw – the rulebook. The rulebook is abysmal and explains everything poorly, likewise the board and many of the cards included in the game would have benefited from having explanatory text or better written text to make you understand what’s going on. It can get quite frustrating having to stop midgame to look up something on Boardgamegeek or some other  forum. There is also a FAQ document that is 20 pages long!! That is more pages than the rulebook has so you get an idea of the chaos in the rules department. This is really sad because it detracts a lot from a really good game with solid game mechanics.

My score for Robinson Crusoe: Adventures on the Cursed Island is 7.5/10

Had the rulebook and some cards been written more clearly this would have been a solid 8 imo.

Caroline says the same, 7.5 only because you get frustrated with how the rules are written since they leave you with interpreting and guessing more often than you would want to before downloading the FAQ document  or checking online on a forum.

Still, we have played this game some 8-9 times so far in two weeks which shows the strength of the game itself despite the writing of the rules.

Z-Man Games announced, on their Facebook page, that in anticipation of the Robinson Crusoe : Adventure on the Cursed Island cooperative board game being available in the States they have posted their rules online.