Victory Point Games is a small format, indie board game publisher currently based in Irvine, California. Originally the company focused on developing quick playing historical war games like the Napoleonic 20 series, States of Siege series, and BATTLESSON series.  They have since expanded their product range to include strategy, card, family, and casual board games like Nemo’s War, Darkest Night, Renegade, and Dawn of the Zeds. Alan Emrich, States of Siege series designer, sums up what the alignment means:

We are very happy to be working with the entire team at Tabletop Tycoon. By allowing us to focus on what we do best, developing and creating amazing gameplay experiences, it means more great games and expanding game universes for our popular series are closer on the horizon.

Tabletop Tycoon will leverage its game industry expertise and its various game publishing capabilities, from logistics to wholesale and retail sales, to support Victory Point Games.  Through Game Salute, Tabletop Tycoon publishes popular games such as  Everdell, Black Orchestra, Alien Frontiers, and Nothing Personal. Having worked with Victory Point Games team for ten years, President and CEO Dan Yarrington is pleased with the addition:

We have worked very well with the team from Victory Point Games for a long time. We are pleased to have their team joining our staff to continue to expand opportunities for the fans of their games.

Dawn of the Zeds is one of Victory Point Games’ many States of Siege solitaire games of survival against all comers. In this third edition, co-op gameplay has been added, along with an extended narrative.

The postcards in every local drug store read, “Welcome to Fabulous Farmingdale!,” an ad campaign that was the brainchild of Mayor Hernandez (who coincidentally employed his wife’s public relations firm to market their community). But right now, things are far from fabulous in Farmingdale and, for once, everyone isn’t blaming the Mayor. Some kind of virus or poison is turning ordinary people into vicious, zombie-like killers. It is not clear how the disease spreads (though it seems that physical contact is certainly one way), but it is obvious what the illness does to its victims.

These undead, nicknamed “Zeds” from the local newscasts as the acronym for “Zombie Epidemic Disease,” are now converging on your corner of the world around Farmingdale. As best you can tell, you have been left to your own devices to stop them while the National Guard organizes a relief column, but that could take days, perhaps weeks, for them to fight their way to you, and until then, what can you do?

With little choice between survival and a gruesome (un)death, you realize that you must coordinate the defense of the town of Farmingdale and its surrounding villages. You must lead the good citizens and emerging heroes of these communities to halt the Zeds’ advances by (re)killing them, to attempt to coordinate the discovery of a cure to this vile scourge, and to preserve as much of the area and as many of its inhabitants as possible. There’s no time to lose…

What’s New in the 3rd Edition
– Tense, balanced, multi-player co-op game play
– ZPP and ZMP events (Zeds Placement Pressure and Zeds Movement Pressure)
– A new type of unit, Heroic Civilians
– New heroes
– New loss condition (if you run out of Chaos markers and must place another, you lose!)
– Changes to the way that Research works and the acquisition of the Super Weapon

Set in the year 1870 of Jules Verne’s classic novel Twenty Thousand Leagues Under the Seas, assume the role and motive of Captain Nemo and set sail in his amazing electric-powered submarine, the Nautilus.

Nemo’s War: Second Edition is a single-player board game of underwater exploration and combat. You will search the oceans, combat vessels of all nations, brave the hazards of the seas, find mysterious treasures, behold and chronicle amazing wonders, and travel around the world in your quest for knowledge and vengeance. 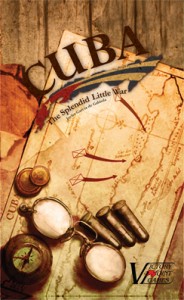 Cuba: The Splendid Little War from designer Javier Garcia de Gabiola, is a two-player simulation of the third War of Cuban Independence, which lasted from 1895 to 1898. This was the last of the three liberation wars fought between Cuba and Spain; the previous wars were the Ten Years’ War (1868-1878) and the Little War (1879-1880). The game includes a province level map and action cards based on historical events. Both Spanish and Cuban sides must balance resource management with efforts to achieve strategic objectives.

In this first game of a new series by Paul Koenig, focusing on the first 3½ days of the World War II Battle of the Bulge in the Ardennes Forest, 6th Panzer Army is a hex-and-counter war game at the operational level, taking you to the northern sector of this famous salient where Allied forces grimly confronted a winter onslaught by Hitler’s vaunted Panzers in the rugged Ardennes Forest. As a player, you must command your German or Allied forces so as to capture the objectives on the board while keeping your casualties down (and your opponent’s casualties high).

Sign of the Pagan by Richard Berg is a tactical-level recreation of the Battle of the Catalaunian Fields, where in 451 Roman forces with Visigoth allies brought to a halt Attila the Hun’s advance in to Western Europe. Sign of the Pagan uses Contingent Activation Markers to balance the activity of different forces in the game based on historical assessments. 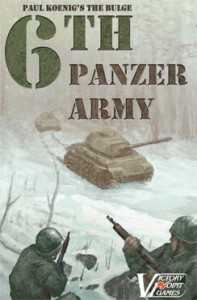 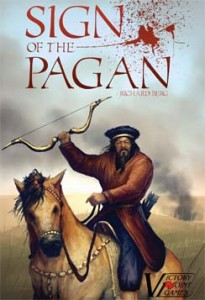 Victory Point Games has announced its first expansion to For the Crown entitled Shock & Awe.

Tensions mount in the war for the crown, and both sides are turning to new tactics and strange allies. Battlefields are haunted by ghosts, buffeted by invisible forces and wracked by lightning. Armies march under the auspice of statues, and secure formations are breached by attacks from odd directions. Which side will best master these new devices and capture the enemy sovereign?

For the popular deck-building game, For the Crown 2nd edition, comes the first expansion, Shock & Awe, introducing 13 new cards and 10 new unit types to pit against your opponent. Bolster your economy with the Caravan, duplicate key assets with the Changeling, and rule the battlefield with the mighty Amazon. Who has the wit and will to lead these new forces to victory, and who will succumb to Shock and Awe?