I Will Never Grow Up Games is currently in the process of renovations and moving location and will be temporarily closed until the move is complete. Estimated re-open date is December 15th, 2022. We apologize for any inconvenience and hope to see you back after the relocation!

The Battle of France was the first great tank battle, and perhaps the first major battle, of World War II.  France was to be the proving grounds that Germany’s Panzer tank divisions were to become feared on.

No one suspected a strategic pincer attack from the Ardennes forest, but rather through the Maginot Line. Nearly everyone believed that the Maginot Line would be the ultimate wall of defense against Germany. Heinz Guiderian was the exception. His ground breaking idea of mechanized warfare created World War II. Here is where he would show the world the strength of a concentrated attack force and how an entire nation could be brought to its knees by a swift, decisive strike.

This is a Print on Demand product supplied by a 3rd party service.
You will be redirected to The Game Crafter in order to place your order.
Orders will be entered in to the production queue and shipped direct to you when completed. 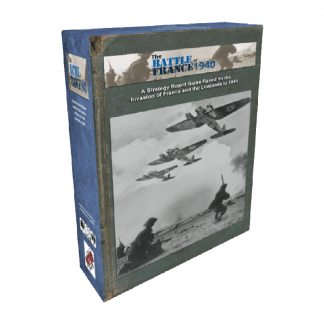