Conflict and Chaos: Vietnam 1965 is a historical strategic board game designed by James J Campbell and published by I Will Never Grow Up Games.

On 2 March, 1965, following an attack on a US Marine barracks at Pleiku, Operations Flaming Dart, Rolling Thunder and Arc Light commenced. This intense bombing campaign, which ultimately lasted three years, was intended to force North Vietnam to cease its support for the National Front for the Liberation of South Vietnam.

Ultimately, the US involvement in the war in Vietnam was ineffective. On 15 January, 1973, President Richard Nixon announced the suspension of US offensive action against North Vietnam. By wars end, the Vietnamese had been fighting foreign involvement or occupation for 116 years.

Take control of the nine major powers involved in one of the most controversial conflicts of all time. Can you change the course of history?

This is a Print on Demand product supplied by a 3rd party service.
You will be redirected to The Game Crafter in order to place your order.
Orders will be entered in to the production queue and shipped direct to you when completed.

**Here is a list of errata and clarifications from any copies purchased prior to 23/08/2021:

1 – CONTROL AND ROUND TRACKER MAT

Can Covert units move on the covert map?

PARU has units starting the game on the Ho Chi Minh Trail. Are those territories US owned at the start of the game? 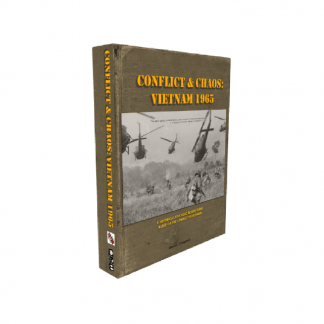