For Crown and Kingdom

While the gameplay of For Crown and Kingdom is simple, winning is not.

Before play, the players arrange the modular board, resulting in a different environment for each game. Then all the players take turns placing their five characters on the board.

On a player’s turn, she may first spend money to purchase a Bribe. Depending on the amount spent, the player cfan modify their movement on their turn, activate an additional character, or return an imprisoned character to the board. The player then must move one of their characters around the board a number of spaces equal to the number of characters in the starting region. Once the character reaches its new region, its power is activated. The different powers enable the players to earn coins, take coins from the other players, remove other characters from the board, make use of a region’s special ability, and place a support flag.

As the board changes after every player’s movement, the players have constantly evolving options on their turns. The first player to add a support flag of their color to every region wins the game. 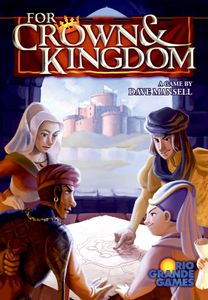 You're viewing: For Crown and Kingdom $9.95
Add to cart