Serpent Stones is an interpretation of an ancient game believed to have been played by the Aztecs over 600 years ago.

As head priest of an Aztec warrior house, you must command a specialized team of Aztec warriors in ritual combat on the battlefield to satisfy the gods. Drawing on the power of teotl from your temple stone, your warriors can wield specialized nahualli animal attacks to strike or capture opposing warriors standing in your team’s way of capturing your opponent’s temple stone. The gods may show you favor by giving you an advantage during battle, but will it be you or your opponent that quenches their insatiable blood thirst today?

A player wins when either he captures his opponent’s temple stone by placing a warrior card on it or he forces his opponent to suffer the “Wrath of Tezcatlipoca”, a fancy Aztecian way of saying the opponent ran out of cards. 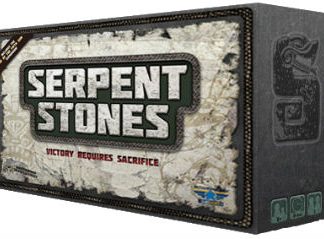