The War to end all Wars!

These Custom crafted WW1 COMBAT DICE were made with one purpose; to show all contenders that you dictate the course of history!

A great addition to any First World War combat game that uses a D6 combat system, these dice are custom made with the national emblems of the major allies, the British Empire, France, Italy, the United States and Imperial Russia as well as the Central Powers, Imperial German, Turkey and the Austro-Hungarian Empire.

Each die is cast in the oft used colour to match the playing pieces of that nation.

The world is full of Armchair Generals. Show your opponent your military and tactical prowess with Field Marshal Games WW1 Combat Dice. 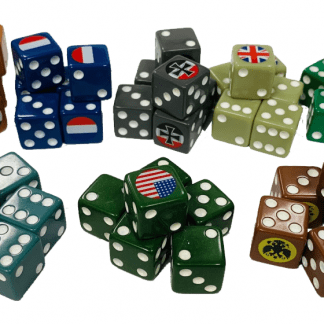